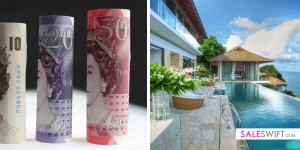 The strength of the pound against the euro means more and more Brits are looking to buy properties in Spain. This is according to the “Overseas Mortgage Arrangers – Conti”, who claim that 45% of all their enquiries are now made by people looking to emigrate to the sun-kissed country.

The number of Brits buying Spanish homes fell significantly during the economic downturn, but as the Sterling has strengthened to a seven year high this summer, many people appear to be looking for a place in the sun once more. Current exchange rates of upwards of €1.40 to the pound now mean that a €200,000 property costs around £142,857 compared to £158,228 less than a year ago. In addition to that, economic uncertainty continues in Spain and prices in some parts of the county have fallen by as much as 50% in the past eight years.

That’s not to say that the market is on a downward curve. In fact, it is showing signs of recovery with figures from the European Union’s data initiative Eurostat suggesting that Spanish home values are up 1.6% year-on-year. “La Caixa – one of the largest Financial service providers in Spain”, has also stated that the market has already bottomed and began to rise again, with no further falls likely in the next few months.

France is the second most popular destination for British buyers, accounting for 31% of Conti’s enquiries in the second quarter of this year, while Portugal came third at 18% Clare Nessling, director of Conti, said the figures show that the pound is “boosting buyers’ budgets” and making “a slice of overseas life even more tempting”. She added that as well as “bargain prices”, buyers are also being tempted by borrowing rates at record lows.

The idea of moving to warmer climes appeals to most people, but before taking the plunge there are many things to take into consideration. This is where solid legal advice is imperative. As with buying a home in the UK, there is a conveyancing process to go through and you will need to enlist a solicitor to carry out checks, look over contracts and register the property’s title in your name.

Another thing to think carefully about is how you are going to raise the finances needed. This is where being able to sell your home in the UK quickly can be useful. By using a specialist cash buyer, you can get the money sooner and make your dreams of living in the sun a reality. Such services do not charge any fees (so you can avoid estate agent fees) and solicitors’ costs are also covered. In most cases, you will receive between 85 and 95% of your home’s market value and a purchase is guaranteed regardless of your home’s condition and location.

If you are able to fund your entire Spanish purchase in cash, you will have greater buying power and will able to haggle somewhat on the price. If you only plan on using your place in the sun for part of the year, you can potentially make money from it by letting it out to tourists.

James is an expert adviser & consultant for some of the UK’s largest Property Acquisition Companies. With over 30 years’ experience, he can assist with all the information & services needed for a Swift & Guaranteed Sale of your Property! Call @ 0208 517 3998 for assistance. For a FREE House Valuation & quick Sale of your property visit Saleswift Home Buyers